For the past two years, my band, Kev Bev, has played a small but growing music festival in Spain called Pueblos Blancos Music Festival. The festival covers four of the most picturesque whitewashed villages of Andalucia. The largest village is Ronda, where you can expect a crowd of approximately 600 to come see you play. The smallest is Villaluenga del Rosario, where only a few dozen people tend to come out – but you’re playing in an 18th century bullring on a mountaintop, so still totally worth it.

We first learned about Pueblos Blancos Music Festival at a SXSW gig we played about two years ago. A couple approached us after our show to talk about a music festival they organize in Spain. They thought we’d be a good fit and they gave us their card. Our initial thought was that it all sounded too good to be true, but we did end up reaching out. We were immediately wooed by the level of detail in the email that the festival organizer, Phil, sent in response. Being an organized and thorough communicator myself, who is constantly falling prey to the hippy business mentality of the Austin music scene, I felt that an email like this was a breath of fresh air. This opportunity had to be legit. The band agreed, and we gave it a go. We’re forever glad we did.

There is a lot of magic in the Pueblos Blancos Music Festival experience. Perhaps this is why they have so many repeat bands (like ourselves now) who tend to come out every year. First off, this region of Spain is absolutely beautiful. You could stay within the area of the festival cities for weeks and be perfectly content. But at the same time, there is so much more to see and do within a short driving distance from the festival headquarters. Our favorite places to stay before and after the fest are Nerja and Granada. Nerja is a historic whitewashed village perched over the crystal clear Mediterranean Sea with multiple beautiful beaches, laid back topless bathing, endless dining opportunities, and a super chill family atmosphere. Granada, as many know, is tapas capital of the world and home to the legendary Alhambra, as well as flamenco culture.

Since Europe is so wonderfully connected by rail, you can also get to Madrid, Barcelona, or pretty much anywhere else in the country you’d like to go within a matter of hours. You’ll see endless olive fields and castles along your route. I recommend driving, however, as you can stop more and experience the quaint rural culture of Spain.

Anyway, back to the festival. Pueblos Blancos Music Festival is a very special and unique experience. I want to share some highlights about why we enjoy it so much, just in case you’re a band who’s considering the adventure or an investor interested in helping this festival to grow.

As all traveling musicians know, a backline is crucial to being able to afford to play a show. It’s impossible to fly with all of your gear, and renting gear can be expensive and cumbersome. The backline provided at Pueblos Blancos includes drums, keyboard, stands, amps, and hand percussion if you need it. You have to travel with your own guitars (which is especially difficult for the bassist) but the festival is great at getting you connected with other bands on the bill who you can borrow from. The sound at every venue is great. Sound guys are volunteers. They are friendly. They want you to sound good and feel good. They can’t always give you all of the encores the crowd insists on or even a proper sound check, but it’s not their fault. The lineups are packed, and they have a schedule to keep. 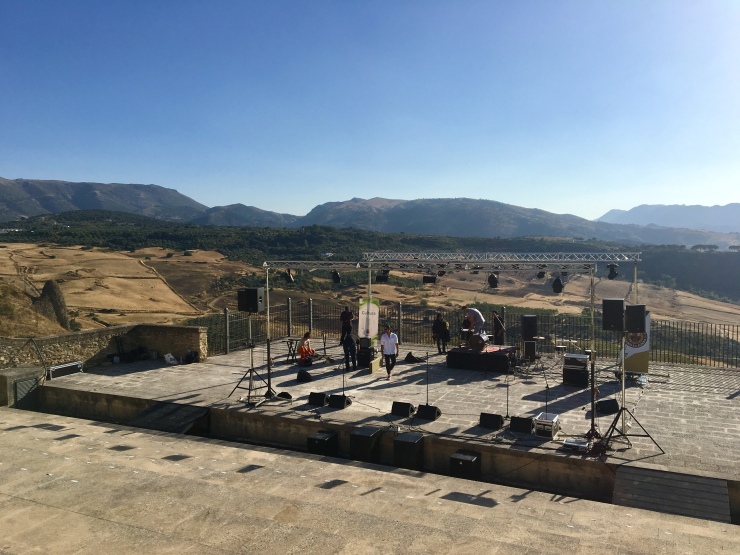 Room, Board, and a Bus

This festival has a homebase of Montejaque, where every band is comfortably put up. The festival is generous enough to give private rooms for couples (yes, they’ll put up your significant others too) and most accommodations include full kitchens and pools. The festival also provides lunch and dinner daily, as well as a super legit bus to get you to your gigs in neighboring cities ontime. Keep in mind that these fantastic benefits are your payment for playing the festival. As a large band, we actually prefer these benefits to cash. The value of having equipment, room, food, and transportation provided to us – and our significant others – is far more than any amount the festival could afford to pay us in its first few years. It’s like a “tour in a box.” And you don’t have to deal with taxes. You get to expand your fan base in four different cities, bond with your band and dozens of other bands from around the world, and not have to worry about shit.

The most beautiful thing about Pueblos Blancos Music Festival is that everyone you meet is a new friend. Some of these new friends will truly inspire you and change the way you look at this big wide world. Others may offer opportunities such as other music festivals across Europe. Yes, this happens. In fact, we may be going to Germany next year due to a new connection we made during our gig in Ronda this year.

Pueblos Blancos is still a small music festival, but it’s growing. And every year it becomes more and more impressive, with better sponsors, better benefits, and better crowds. We’re so excited to see what this turns into as we continue to come back as often as we can.

For more information on Pueblos Blancos Music Festival, check out their website at www.pueblosblancosmusicfestival.com.

This is a site for dreamers and doers. My intention is to use this space to help inspire others. Please inspire me by reaching out to candy@goingtinytogobig.com.